At Sareen Stone, we've supplied our Manhattan Limestone tiles for both floors and walls on levels 12, 17, 19 and 22.

The redevelopment of 60 Martin Place by Investa Office and Gwynvill Group involved demolishing the previous 1970s tower and the replacement with a 33-storey 40,000 square metre building.

Hassell Studio, the winners of the National Architecture Awards, was the base built architects of the tower project redefining the CBD’s skyline.

Founded in 1938 in Australia, Hassell was started by a small group of architects with a big vision. After more than 80 years in the industry, the talented team have worked on significant projects around the world.

Looking out at Sydney Opera House

60 Martin Place is located at the prestigious location, on the corners of Macquarie Street, Martin Place and Philip Street, establishing itself a solid spot on the Sydney skyline that blends with the green terraces of the Domain and Royal Botanic Gardens.

In close connection to other important Sydney landmarks, the building boasts unparalleled views of Sydney Harbour and Opera House from almost all levels.

One of the most unique aspects of the architectural design is its striking curved façade with its cantilever design that expands 8 metres above the 1930s-era stone St Stephen Church. 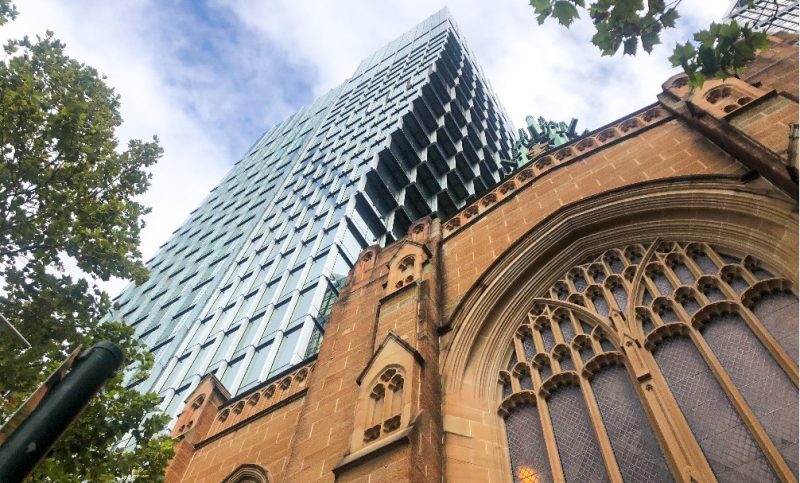 “The building’s striking northern facade is a fluid, curved form. As the building rises, the curve pulls back from the spire, giving it ‘breathing space’, before curving again.”

“The design respects the existing materials that give Martin place its civic character. At street level, the building features a low-scale podium, formed of Sydney Gosford Sandstone, with blades that are complemented in a lighter way on the façade of the tower above.”

At Sareen Stone, we are proud to have contributed to the exceptional design of 60 Martin Place. In collaboration with MPA and Unispace, our Manhattan Limestone was used in lift lobby spaces and extended in offices for some tenants on multiple levels.

One of our most sought-after Limestones, the Manhattan, has the appearance of calming grey clouds interwoven with silver and white hues. Reminiscent of Marble in appearance due to the striking veining with an added touch of soft elegance of the Limestone, it looks exceptionally impressive when used in large areas.

Hence, some tenants deemed the stone an ideal choice for their lift lobby and office spaces at 60 Martin Place, which demanded professional but still elegant and a sophisticated contemporary look. 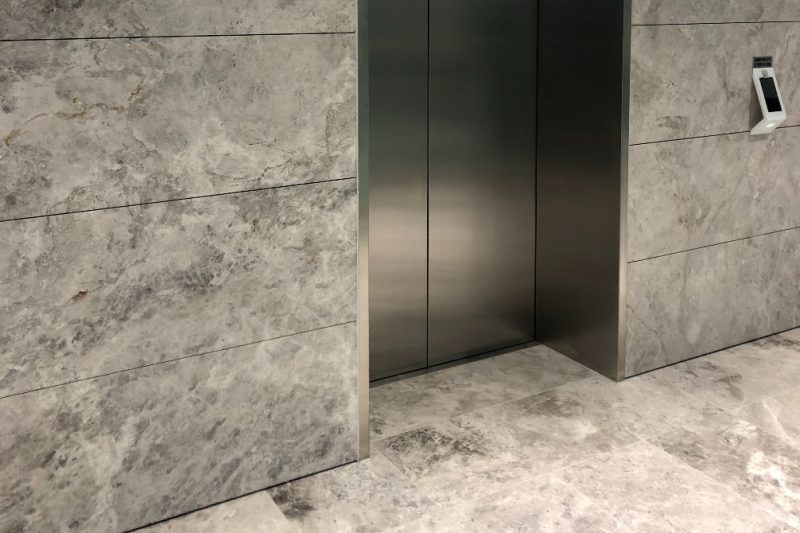 The building entrance lobby greets you with an elegant design by Hassell Studio. Our Manhattan Limestone makes an introduction as you come out of the latest technology smart elevators on floors 12, 17, 19 and 22.

On these floors, our Limestone tiles were used for both walls and floors. Custom order slabs were cut to size and used for the walls in between lifts which allowed the stone to showcase the beautiful natural variation of the grey and white colours.

The slabs were book-matched and expertly installed by Modena to enhance the flow of the whole space.

After installation of the lift lobbies, we were pleased to hear that multiple tenants chose to extend the tiling into their office spaces too.

See-through glass walls ensure a seamless transition between these areas and the consistent use of Manhattan floors enlarge the optical size of the space. Small grey rectangle tiles have been added to provide an additional touch and bring out the grey notes of the Manhattan on level 12

The seamlessness of the space is enhanced by multiple consistent dark grey colourway used for pieces of furniture as well as wall fixtures. The design experience of 60 Martin Place gives an impression of refinement and attention to detail.

This building is a perfect example of a corporate space that is not merely functional but also inspirational from the minute you walk in, enhancing the office experience for the employers as well as putting a final touch to the professionalism of the company within that space. 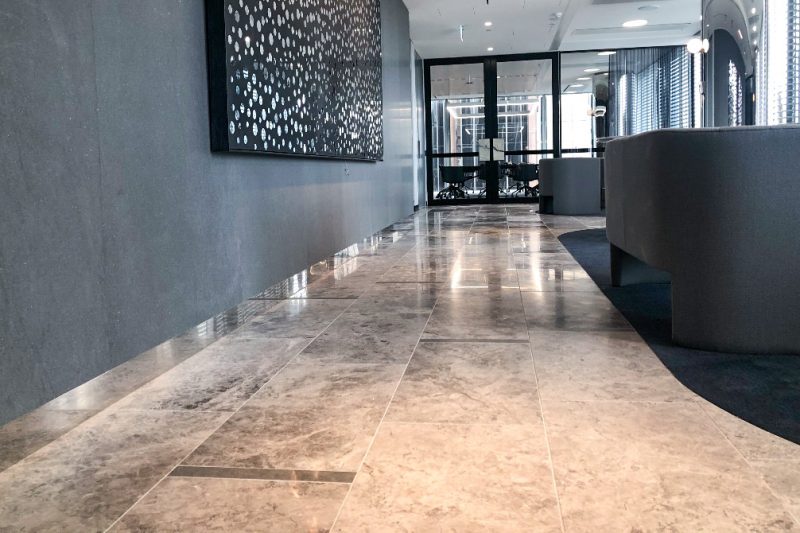 As a ‘Smart Building’, 60 Martin Place incorporates the latest building technologies. These include smart lighting features such as automatic window shading that reduces the need for air-conditioning, smart access control for doors, lifts and lockers controlled via a custom-building app that can be personalised for different tenants.

Design that was created with sustainability in mind includes floor-to-ceiling windows that maximise views and reduce the need for artificial lighting. 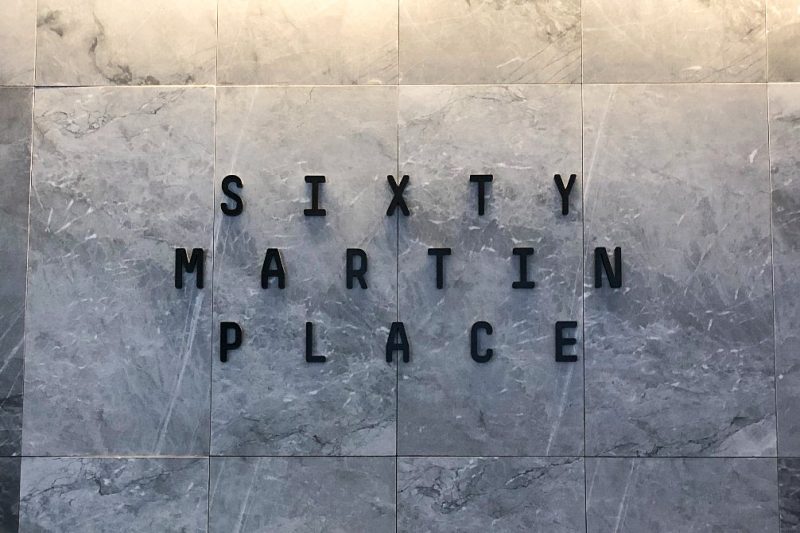 Nature and Eco-design Focus for the Future

The architecture of 60 Martin Place did exceptionally well in terms of blending but also standing out from its environment. There is a strong focus on connecting the building to the natural surroundings.

This is demonstrated by the connection to the surrounding greenery of the Domain and Botanic Gardens as well as the rooftop Gardens on the building.

The natural materials are utilised throughout the whole project, with Sydney Sandstone used for the low-scale podium as well as natural stone and wood materials used in all main lobby spaces.

Most of the structure is surrounded by floor-to-ceiling windows that maximise the views as well as natural light in the workspace. 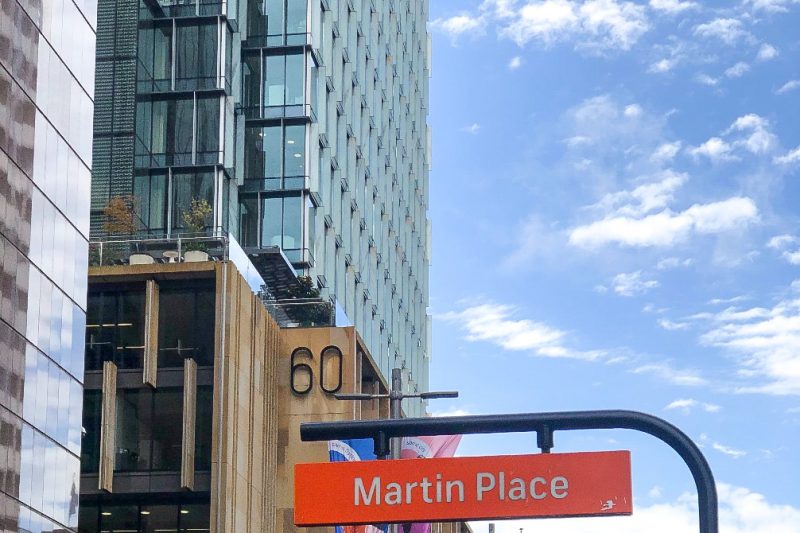 Martin Place, Sydney’s commercial heart dubbed by many as “Australia’s Wall Street”, is being reconstructed with 60 Martin Place representing the new standard and demand for architectural design that adds dynamism but also connects to nature.

This was a step in the right direction which has been proven by the success of the building in which 98% of office spaces have been leased before the official opening.

At Sareen Stone, we are thrilled with the design of the newest addition to Sydney’s skyline and proud to have contributed with our Manhattan Limestone on several floors.

Are you thinking about using natural stone in your next project?

Browse our website to see our range or contact us on 02 9666 9222 or email info@sareenstone.com.au to talk to one of our Stone Specialists today. 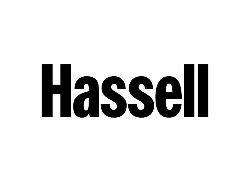