Facebook
Twitter
LinkedIn
Pinterest
Email
Reinventing a 1980’s bungalow into a modern family home for the 21st century was the brief for the renovation of a home in Byron Bay. We talk to Simon Addinall, Co-Director and Founder of Those Architects, about the project, Burch House. 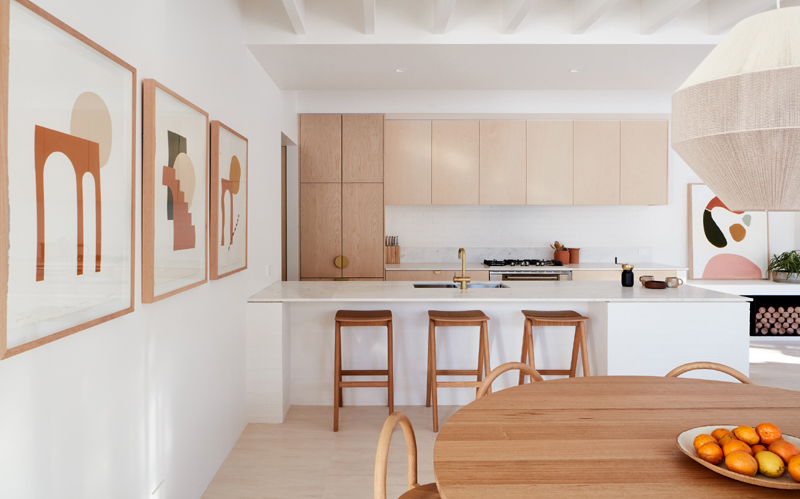 It is very difficult to make an old house look new and vice versa. Our approach is to draw a distinct line between the two. Keep the original and add the new.

Reinventing this 1980’s bungalow into a modern family home for the 21st century was a triumph. What do you see as the advantages for the client of building a home this way?

Generally if the house has good bones, we can use a lot of what exists. The consideration of costs can also come into play resulting in the decision to renovate rather than rebuild. The risk with renovating older houses can be the unknown how much detailed demolition will be required to get it back to base level can sometimes make a renovation unviable.

With the Burch House, we had a great foundation to work with. It is double brick, none of the interior walls were structural, it has a single roof line, and the roof structure sits on top of the external walls. All of this was to our advantage, and made our job easier. The front part of the house is the original and we haven’t really changed it at all, apart from windows and rendering it. The internal configuration is obviously different.

With this renovation, the back of the house was removed, which gave us a clean slate to work with. The land size of the block is a standard size for Byron Bay.

It was a balancing act between keeping as much outdoor space and meeting the client’s needs for the internal space. The house overall isn’t massive, however, it still has 6 bedrooms. The new section at the back is two storeys. This was added to increase floor space and retain as much of the garden areas and landscaping as possible. Living in Byron Bay Summer goes well into April. Our clients wanted to be able to use the outside space as much as possible. 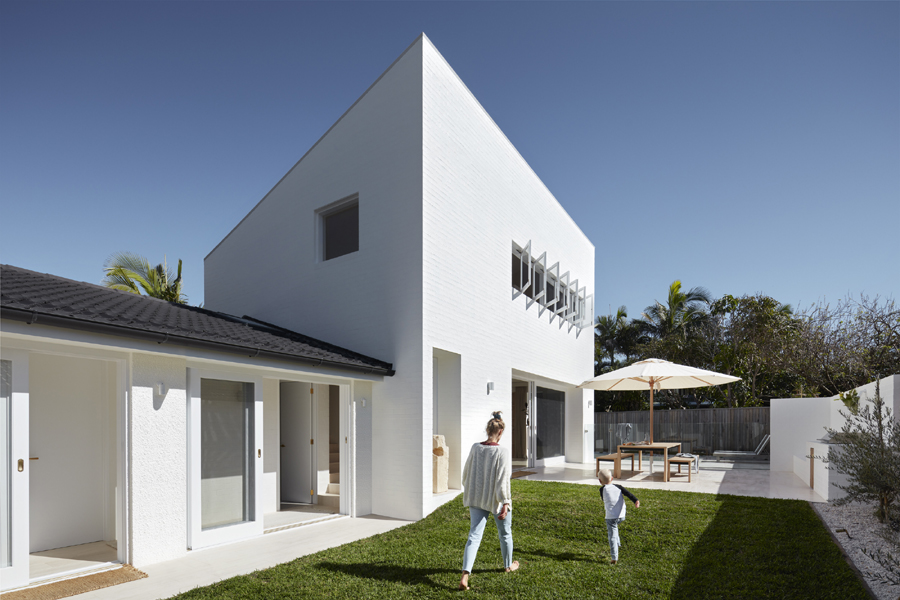 Is this something more clients are requesting i.e. renovating older style homes into the 21st century?

The decision to renovate rather than rebuild is generally cost driven. Generally, it’s not always affordable to knock down and start again and the choice is made for you. Some houses are better/easier than others to renovate. Californian Bungalows for example are generally built much better than the houses built in 1980’s and 1990’s.

Renovating a 1990’s house for example, can be more difficult. With 1990’s homes, you generally need to spend a lot of money demolishing large parts to get the home back to a base level before you can start the renovation. The reality is what you have to start with and what budget you have, will determine the outcome.

Clients generally want more internal space, to make what they have more open plan. We are however doing more subtle separation of dining rooms within this space. By using floor level changes, or a piece of low height joinery, just to define the space without separating it completely. 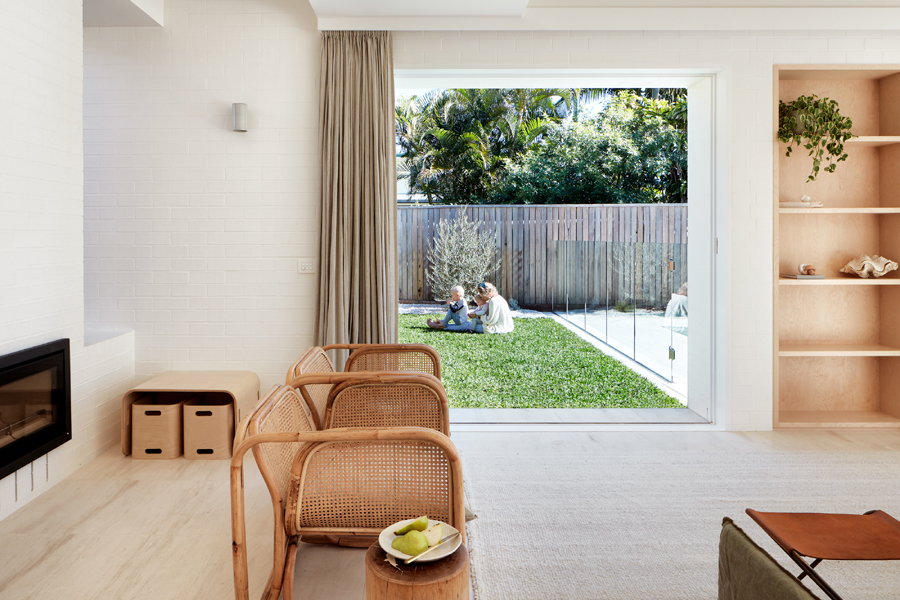 Did this project present any challenges? How did you overcome them?

The biggest challenge working with an existing house is all the nuances that come with an old house. There could be varying ceiling levels, walls being out of square, multiple roof lines and more.

With construction of any kind, when things are out of plumb it becomes very evident once you apply new finishes. Our approach generally is to change as little as possible to the existing house, and celebrate it for what it is

In terms of design, the rear addition was confined by councils’ setback controls. We had to ensure that we kept within these controls and that essentially defined the shape of the rear addition.

Why did you choose stone for the flooring?

Initially the client wanted to use unfilled travertine, however, it was suggested that this would not be suitable as the holes in the travertine would fill with dirt, and this was not what our client wanted. So we looked at using limestone instead. I can’t take credit for it. The client chose the stone.

The client had a range of samples sent and the one chosen was by far the nicest.

We loved the colour as it references the sand. It is amazing how to soft it is to walk on, it doesn’t feel hard like concrete. The colour of the stone adds a subtle softness, it somehow softens everything. 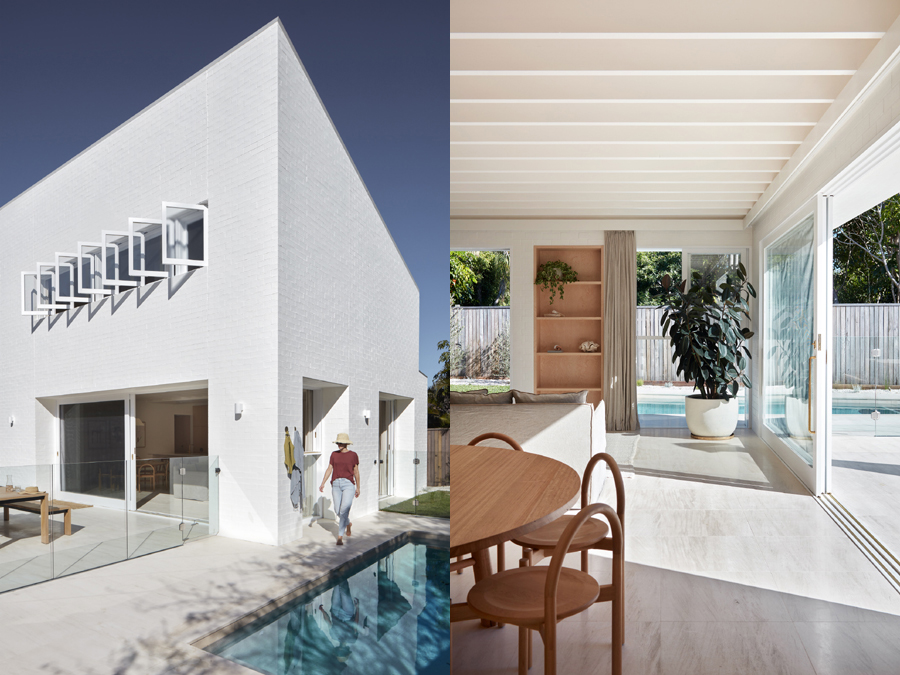 What did the Santa Fe Limestone bring to the project?

The Santa Fe Limestone brings a sandy beach reference to the home. It is super hard wearing and perfect for a young family. It looks new all the time.

We also used a similar coloured cobblestones for the driveway that tie into the limestone. This provided a direct transition from the cobbles to the tiles, as the interior tiles lead all the way out to the front entry.

Do you have any other tips for anyone preparing to renovate an existing home?

Always use an Architect when renovating. Their knowledge and expertise in creating space and with consideration to the flow and function.

Always try and leave the original house as is. We try to convince clients to keep as much as possible of the original house, otherwise it destroys the character. It is very difficult to make an old house look new and vice versa. Our approach is to draw a distinct line between the two. Keep the original and add the new.